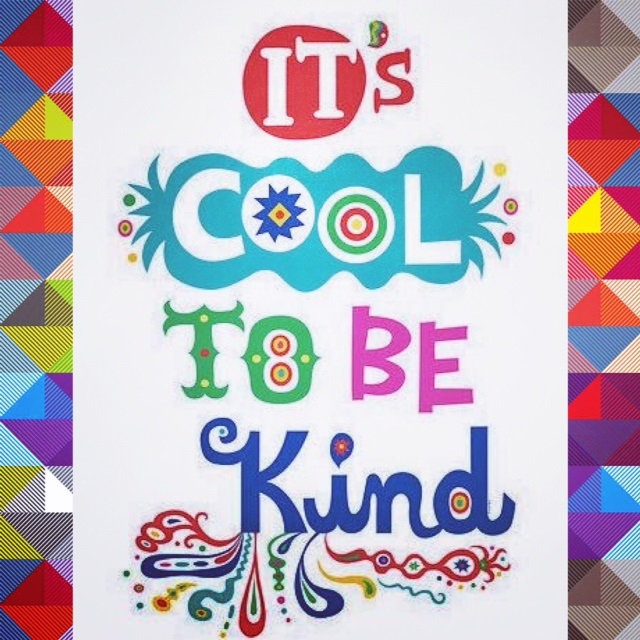 Thursday of last week was National Day of Kindness (NDK). I had no idea this day even existed; I don’t know why I didn't, I mean there is a National Day for just about everything! But not knowing that it was NDK I was searching through my Facebook news feed and stumbled upon a video that was so super sweet. This little girl wanted to buy a cake but being on a fixed budget the grandmother couldn't afford it. The man behind them in line paid for the cake because when he was a little boy he wanted to pick out his own birthday cake but they couldn't afford it, but a man overheard the conversation and bought the boy the cake he wanted. Now he wanted to pay that forward and handed the little girl the cake. In the next scene the little girl is giving her wheel chair bound grandfather the cake for his birthday and long story short, it was the grandfather that had bought the little boys birthday cake years ago and now he was getting a cake back in return when he didn't have the money. I did not describe this little commercial in the heart tugging way that it is displayed because I was in tears and it really hit home to me and I had this idea that I wanted to do a random act of kindness. And then later on finding out it was NDK I knew I wanted to do something!

There is a radio station here in Atlanta that has Kindness Mondays (I'm not sure if that's really what it's called but I'm going to call it that). They have a letter that you can print off that says something to the effect of I just wanted to bless you today and hopefully you can pay it forward. So as I'm sitting at the car dealership getting my oil changed, my stomach started to growl. I thought, I'm going to pull through somewhere and get something to eat and pay for the car behind me! I have always wanted to do that but never have so I decided today would be the day! I head over to Chick-fil-a and remembering that their lines are usually long, I was going to write my sweet pay it forward letter for the car behind me while I waited in line. But wouldn't you know it, there was no line today nor did I have anything to write on in my car (well except for a Sonic napkin but I couldn't hand that to a Chick-fil-a employee!). I paid for my food and then told the girl working the drive thru that I wanted to pay for the car behind me as well. She happily slid the card twice and handed me the receipts and then said ma'am your order isn't completely ready could you please pull forward and we will bring it out to your car. Of course I agreed but I didn't want to. I wanted to be the anonymous person who bought lunch for the car behind me and now it looks like I'm waiting to see what happens!! But since I had to wait, I did watch the exchange happening in my rear view mirror. All the sudden the car who I had paid for was pulling off to leave and I didn't want it to look like I was waiting, so I quickly grabbed my phone and acted as though I wasn't paying attention but I can see the bright red car sitting to my right out of the corner of my eye. I lifted my head, looked over and the driver had her window down saying thank you over and over again. I rolled down my window and said I just wanted to bless you today with a random act of kindness, I hope you enjoy it. She must have said thank you four more times before she pulled away. And this is when my eyes filled up with tears. This woman seemed so thankful for just that tiny offering I was willing to give and I was so happy that I was able to do that for her. Even though I was so embarrassed that I was still there when she pulled off making it look like I wanted the thank you, but that wasn't it at all. I just wanted to do something nice for someone and bless someone’s day because I know many of my days have been blessed by others. But now I'm glad I was there and got to see the appreciation of this woman and it truly inspired me to do this more often. I might even create my own little Pay It Forward cards and keep them on me for moments just like today!

Have you ever paid it forward? Has someone shown an act of kindness to you? I would love to hear your stories!

Oops, you forgot something.

The words you entered did not match the given text. Please try again.